Cameron’s Nursery was warmly praised while picking up the National award for Best Environment for the second time in a row for its outstanding commitment to environmentally sustainable practices and unique community outreach projects. Presented by Nursery & Garden Industry Australia in Adelaide in February 2016, the Awards recognise and reward excellence within the industry and acknowledge leaders as they strive to achieve best business practice.

The ABC Gardening Australia show filmed at Cameron’s Nursery with the host Costa Georgiadis interested in many aspects of the production of plants and the environmental endeavours of the business. The filming showcases the many sustainable initiatives that Cameron’s Nursery has on site after winning many water and environmental awards. Costa was also interested in several plants which are bees attracting, propagation of plants and seeing the potting machine in action.

Cameron’s Nursery has been working with the NSW Department of Primary Industries for several years, trialling new systems to capture, clean and recycle water around their two hectare property. During the millennium drought the nursery actually ran out of water, which prompted them to move location and start from scratch to build something unique in the nursery sector.

Owner Sonja Cameron said the nursery now captured every drop of water and recycles the lot. She said it took years of experimentation to develop the system.

“Underneath is a hard base, you can’t have any dips or hollows or any rocks,” she said. “Then we layer the black plastic on top which seals the ground and enables us to capture every drop. Then we put a geo-fabric through [which] becomes a wet mat and that’s where the plants draw the water up from. The weed map on top is just a protector for the geo-fabric and for the plants to sit on.” 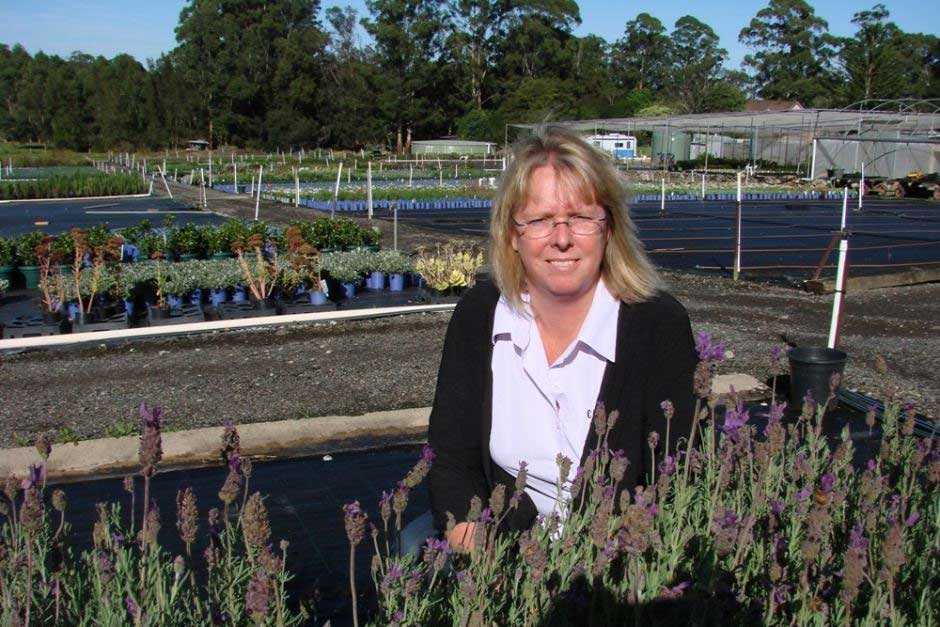 She said water use has been reduced from 25 megalitres to just five which she attributes to the use of drip irrigation systems instead of sprinklers and water monitoring to identify waste. The system includes some unique features that were custom built, including a flocking unit. “It takes out all the clay particles, anything that’s floating, then the flocculent is injected into the water.

“The flock particles, which are like a snow flake, sink to the bottom and the clear water rises to the top and we shandy that off.” The filtering system is essential when distributing water through drip irrigation systems and Sonja Cameron is proud of the fact that it does not require harsh chemicals to clean the water. “We also use a slow media filter which is full of [rock wool]. It slowly brings the water from the top all the way to the bottom. Natural bacteria builds up and that kills off any bad bacteria or pathogens.”

She said these systems had been documented and accredited and could save the industry a lot of water and money. She said she wanted to protect the land for future generations. “We’re not going to be the last people working on this site and we have no right to pollute it.”

The NGIA Environment Award recognises National businesses that demonstrate leadership and commitment to environmental management, sustainability and community participation in environmental issues. It is open to all industry operators.

Camerons Nursery won the Environment Award at the National Awards night held at Fenix Restaurant and Events, Melbourne in March 2015

Winners of the 2013 World Environment Day Awards were announced at the Awards Presentation Dinner on Friday 7 June 2013 at the Park Hyatt Melbourne.
Cameron’s Nursery won the Excellence in Sustainable Water Management Award for their ‘Reduce, Recycle, Reuse Water Saving Project’

Nursery Management Systems (NMS) is an Australian Software package which has been developed, with the assistance of nursery owners and managers, specifically for the Wholesale Nursery Industry.

Agnov8 provides a range of Environmental sensors, water resistant and rugged tablets, whole farm Wi-Fi solutions which provides a very practical tough products with Australian back up and service.

Plugwise helps consumers and organisations realise quick results in their efforts to make their businesses and homes more sustainable. Plugwise has developed and produced wireless systems for energy management and appliance control since 2006. Plugwise technology has helped users understand their energy consumption at a device level and reduce their energy bill by up to 40 percent.
Plugwise is a leading supplier in the market for wireless infrastructure and dynamic energy management for buildings. The Plugwise system is easy and safe to implement at low cost yielding a high return on investment.

Inspirational Gardening is a brand sold in retail outlets in Australia which exists to develop and promote beautiful and interesting plants back into Australian gardening.